A well known passage from Walter Benjamin’s Theses on the Philosophy of History describes the angel in Paul Klee’s painting “Angelus Novus,” which was a gift from the painter to the writer and critic. Benjamin imagines this ‘new angel’ gazing upon  the ruins of the history even as he is propelled relentlessly into the future.

“Where we perceive a chain of events, he sees one single catastrophe which keeps piling wreckage and hurls it in front of his feet.” The angel would like to heal the disaster, to make the smashed things whole, but he is constantly being thrown ahead by a giant storm, “blowing in from Paradise.” He can only survey the damage that passes too fast for him to repair. It is this double movement,
a melancholy backwards gaze onto the nightmare that is history coupled with an irresistible flight into the future, that Benjamin ironically names “progress.”

How might things look to the angel today, after the fall of the Berlin Wall, the collapse of communism, neoliberal triumphalism and its host of supposedly contingent ‘embarrassments’ (endless wars, financial collapse, ecological devastation…), in short: what does the angel of history see at the end of history? The pile of wreckage continues to accumulate at his feet, but how lovely this heap of broken images now appears: there shoots the head of Lenin on a chiseled shot glass, here a beautiful Lissitzky motif makes for an attractive wallpaper design, and in the nightshop next to a three star hotel, neatly stacked on the shelf, is rubble from that famous Wall on sale as souvenirs. The past catastrophe has been miraculously sublated as glittering appearances. Symbolic reminders of revolution are remade as radical decoration, agit prop turned into pop. This recycling is part of the cunning of capitalism, and one wonders whether the angel is more distressed or distracted by these spectacular surfaces that effortlessly glide over jagged ruins.

This brings us to a second question: in which direction is this backwards flying angel traveling? East or West? As we know from Hegel, universal history moves in a straight line from East to West, i.e. from Oriental despotism to Western liberalism, with Europe as its absolute end—although in the last decades many would identify the United States of America as that spiritual endpoint, and Hegel himself speculated that “America is… the land of the future, where, in the ages that lie before us, the burden of the World’s History shall reveal itself.” In post-history, however, Spirit moves ‘regressively’ from West to East: it returns to its origins in order to bring the once surpassed lands into the fold of modernity, yet not without the kind of accidents, antagonisms, and strange reversals that make up the stuff of history. Indeed, post-history might be nothing more than this fateful shift in Spirit’s historical trajectory. What better representative of the Weltgeist has there been in recent decades than Jeffrey Sachs and his band of Harvard economists traveling to Russia to transform the defunct command economy into a shining example of the free market? Their shock therapy (a highly advanced and efficient version of Marx’s “primitive accumulation”) helped engender the new form of twenty-first century authoritarian capitalism.

The return of Spirit from West to East has also had a dramatic aesthetic impact. A few years ago the angel stopped by an exhibition opening in Kiev, where he could look at drawings by Paco Rabanne and snack on sushi with smoked salmon and an endless supply of imported Raffaello candies. At the afterparty, there were whispers about a new deal for raw resources with Chinese mining giants; the oligarchs were talking jealously about the good deals they had cut in Africa. The Chinese, it was generally agreed, are managing things well.

Chinese Whispers (the title of the wallpaper piece and the exhibition co-authored by Anna Baumgart and Agnieszka Kurant), wonderfully called in Polish głuchy telefon, a wordplay combining “deaf telephone” and “dead telephone,” is a children’s game that teaches a profound lesson about the nature of communication. Even seemingly simple acts of listening and repeating involve active interpretation; all communication effectively entails a process of distortion. One begins by whispering “Marx” and by the end of the chain it somehow comes out “Coca-Cola.” In Masculin, Feminin one of the intertitles between the film’s chapters reads “This film could be called The Children of Marx and Coca-Cola.” But the movie most relevant to our purposes is the following year’s La Chinoise, which radicalizes the theme. There, in 1967, Godard draws on Dostoevsky’s The Possessed in order to tell
a prophetic tale about youth and revolution, uncannily foreshadowing the events of May ’68. Just as in Dostoevsky, so here violence in the service of the revolution goes wrong. Godard’s main focus, however, is on the transfer between Marxist ideology and commodified cool (it’s La Chinoise’s treatment of this political subject that marks a break with Godard’s earlier new wave films), a problem which the film exposes without resolving. The very consumerist society that the young revolutionaries wish to transform thoroughly penetrates their attitudes toward their own revolutionary praxis. Objects like Mao’s Little Red Book become fetishized and treated as stylish fare, piled in towering anti-capitalist heaps; while reading Maoist scripture one of the characters dons a series of joke sunglasses, with the national flags of the USA, USSR, China, France, and Britain filling the frames; a satirical pop song, “Mao-Mao,” provides an exciting theme for the agitated youth.

There would seem to be an unbridgeable disjunction between what Benjamin spoke of as the unrealized possibilities buried among the ruins of history, the “weak messianic power” of lost causes, and their destination as mere appearances, design emptied of political content. For fans of contradiction and overdetermination, this disjunction was brought to its self-reflective maximum in the line “Révolution n’est pas un diner” (“Revolution is not a party” or “Revolution is not a gala dinner”) sung in festive pop tones by Claude Channes. 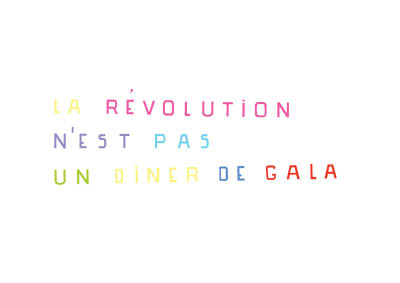