The idea of the exhibition Easy Riders refers to metaphorical and real nomadicity. The show marks the end of a year of lokal_30’s activity in London in Wadeson Street, East End. It has been a year of significant experiences, meetings and events, which will undoubtedly influence the future of lokal_30.

Throughout this time, we organised 12 group and individual exhibitions. At the opening show of our gallery in London, Sketches for a Project, we presented works by Ming Wong, Nick Oberthaler and Alexandra Croitoru, Constatin Luser, among others. The exhibition Streets and Other Interiors featured works by Anna Baumgart or Anna Jaros, which contested contemporary life, traumas and taboo of city dwellers, merging the history of Lódz, Cracow, London and Warsaw. lokal_30 in London also hosted an excellent exhibition Attention: Light! by Józef Robakowski, at which the artist presented his installation from the 1970s from the series “Test” and the video “Attention: Light!” produced in cooperation with a renowned American structuralist Paul Sharits as well as Wieslaw Michalak. Individual exhibitions by Karolina Zdunek and Jan Mioduszewski, Maciej Kurak & Max Skorwider and Malgorzata Szymkiewicz saw their coverage in British art press. Lokal_30 has gained a reputation in London for being a venue specialised in the highest quality video art. It came as a result of outstanding exhibitions by Tomasz Kozak, Wojtek Doroszuk, Anna Baumgart & Agnieszka Kurant and Elodie Pong, completed by the presentation of the 2nd edition of the project Zuzanna Janin Invites featuring videos of artists particularly valued by the curators of lokal_30 – Kamen Stoyanov, Regina Jose Galindo and Anna Molska, among others.

In one of its interpretative layers, the current exhibition, terminating a year of lokal_30’s presence in London, is a herald and a commentary on the venue’s activity – nomadic, unconventional character of our little art centre seems to be of a particular significance to the authors of the show. Following the exhibition Easy Riders at lokal_30, there are other, yet unspecified journeys forthcoming, be it to Brussels, New York or maybe Berlin. The nomadic project of curators and artists of lokal_30 remains open.

The project by Romana Schmalisch is a performance in the form of a lecture-screening. The “Mobile Cinema” is a portable apparatus in use during experimental lectures. In essence, it is a reconstruction of a prop from Alexander Medvedkin’s film “Novaya Moskva” (1938) – a projection table by means of which the protagonist presents his designs and urban visions upon his visit to Moscow. It is a bizarre device which evokes an urban model, a cinema and a photo camera. Like the engineer in the film, Romana Schmalisch makes plans for journeys to various places and for “Mobile Cinema” presentations of her films, urban visions and archival material developed in the course of her research. Subsequent parts of the presentation depict changes in the urban space and resulting social transformations. The “Mobile Cinema” has already been shown in Paris, Rome, Warsaw, Vilnius and Moscow, among others.

In the 1990s Alicja Zebrowska was dealing with the issues of gender, androgyny, bodily taboos and forbidden sexuality, at once repulsive and fascinating. In her latest works, the artist focuses on the way how an individual functions in a capitalist economic system. The exhibition at lokal_30 features her work „Regression” (1997-2002), which is an image of a hypnotic journey of a man into the depths of his very self. It is an attempt at reaching the space of inner identity of a man (the artist), who thus aims to touch the unknown, invisible, impossible and tries to bring it to the surface. Experimenting on herself, she uses hypnosis as a means of creating art and depicting a journey that exists in the mind – a journey consisting of scraps of memories and images registered in the brain cells.

Olga Lewicka presents works from the “Showdown” series. These are monochromatic white and austere “written paintings”. The artist selected texts from philosophical treaties, postulates of Situationists, artistic manifestos, but also quotations from gossip magazines or just single words. Juxtaposed canvasses form a fascinating monologue of inconsistent statements. Yet another time the artist refers in her somewhat ironic work to the issue of a work of art and artistic oeuvre. The title of the series is the name of the final part of a poker round, where players lay their cards on the table. The artist’s intention was thus to denounce the role of text accompanying works of art as an element that does not in the least serve their clarification. The viewer should therefore venture further in the search of the essence of art.

Filip Berendt, author of the project “Visit”, enters unfamiliar houses when their inhabitants are not there, rummages through their belongings, ferrets around, rearranges, ruins the established order. Yet his aim does not consist in imposing any philosophy or world view whatsoever. Not having met the inhabitants of a given house, Berendt reconstructs their facial composite “recorded” in found objects, arrangement of space and proxemics. Berendt’s compositions are portraits that never feature the protagonist – the portrayed person. In turn, they are filled with everyday-use equipment, which is trivial but reveals so much about ourselves. Apart from that of a reporter, the artist also assigned himself yet another task – to create a new reality by means of found objects, to redefine for his own needs that what earlier functioned in a coherent system built by the owner. Every object had its own place and function, even a typical mess had its own logic. The artist appears in such space – like deus ex machina – and introduces his own order; objects suddenly change their use, tamed space acquires a new character; a dressing table becomes a little altar (with the gods of this apartment being probably cleanliness and minimalism), an old discoloured chromolithographic print gains a new life owing to a chewing gum lifting and an immense library becomes an area under threat, access to which is restricted by police caution tape.

Stefan Constantinescu is a Romanian artist living in Sweden for more than a dozen years, who returns to his homeland in his artistic oeuvre. In his works – paintings, artistic books and films – the artist ironically and nostalgically evokes his childhood spent in the “paradise” built by the dictator Nicolae Caucescu. At lokal_30 in London he presents his video work “Troleibuzul 92”, which was featured in the Romanian Pavilion at the 2009 Venice Biennial. Constantinescu’s film presents a scene like many others that happen right in front of our eyes – during a journey on a means of public transport one of the passengers is talking on the phone loudly and indiscreetly. Upon another connection with his female interlocutor, witnesses (and viewers of the film, just like the passengers of the bus) begin to feel deeply concerned, since what they are watching is a scene of rape and aggression inflicted through words: the man publicly (the camera shows him among other passengers, including an elderly woman beside him) threatens and intimidates the anonymous female interlocutor with untamed verbal violence. Language, which usually serves as a communication tool, here becomes a means of oppression, and the telephone appears as an artifact of degeneration or maybe even crime. 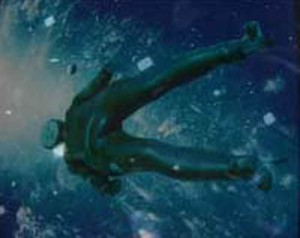