,,And with the Poles I play joke and put them between Germany and Russia.’’ said God, while creating the world.

That’s how the Poles laughed about the geopolitics. Through the ages their country has been struggling with wars, invasions, insurrections, it was even ‘erased’ from the map. That’s why in Polish mentality their nation is perceived as one that has always been fighting for its independence and freedom.

The year 1989 is generally seen as the beginning of a long-lasting period of welfare, peace and political stabilisation. Step by step Poland entered some international structures that guarantee social and economical development. That process, in a larger perspective, is described by Francis Fukuyama in “The end of the history and the last man”.

Fighting Poland, via video works by Polish artists, is an exhibition, which tries to present some of the most actual and widely discussed problems, that touches the Polish nation.

It seems that their subjective visions may be perceived as a skeleton in the Polish mentality’s closet.

Narrative on the one hand, rhythmical and depersonalized on the other ,,Art Is the Power’’ by Józef Robakowski deals with the burden of XXth century wrongful and unfair history. Robakowski, born in 1939, survived World War II, spent his youth in communist Poland, dependent on U.R.S.S. The film, created in the 80`s by Robakowski, shows his attitude towards the political situation he faced that time. Universal as well as personal, distanced and full of emotions ,,Art is the power’’ presents how ambiguous the understanding of history can be.

Two of the works shown within ,,Fighting Poland’’ arouse the problem of Polish national identity transmitted via literature and education that young Poles are boosted with at school.

In para-documental ,,The homeland’’ Piotr Wysocki shows a group of lost and dizzy children in the moment of confrontation with one of the most important Polish patriotic songs, which lyrics are totally incomprehensible for them. As far as the formal side of the film is concerned, the subtitles in German create an integral part of the film, the clash of germanophobic text written in Germanic really striking.

“Romantic Nevrosis” by Tomasz Kozak is also based on a contrast between the two opposite values. He’s working on the XIXth century literature, especially novels by Henryk Sienkiewicz (honored with Nobel Prize), that creates the image of an ideal Pole – brave, ready to sacrifice his life on the altar of the homeland, as well as doing research on some cultural events of nowadays. Kozak seems to achieve it by combining shots from the film, ”Crusaders’’ based on a Polish novel describing XVth century life in Poland (obligatory for the children at school) with rock and metal video clips. Modern interpretation of a ,,real Pole’’?

Monika Mamzeta is an artist who focuses on the problem of a woman and her place in the society. Her film about women’s voting rights touches one of the essential problems in present Poland: the fight for the application of democratic rules in a country, which seems to be focused on conservative ideas. In ,,Loves Me, Likes Me, Respects Me’’ Mamzeta managed in a subtle but explicit way to take part in this discussion. Carnation, the symbol of a woman’s place on real socialism time, here is transfigured into the one that still shows an inferior social position of women, despite non-discrimination laws.

,,Duel’’ by Maciej Kurak is another work that comments on a present political situation in Poland. Largely discussed, criticized by conservative circles action, reminds of the famous experiments by Milgram and Ash. Artists decided to play with the group of unconscious old people, attaining, in result, a very fraught and tensed situation. The documentation of ,,Duel’’ is like a metaphor of interior conflicts striking nowadays polish society. The aim of Kurak was not to tease anybody, but to check human reaction under controlled circumstances.

It seems that ,,ILoveYouToo’’ by Zuzanna Janin is the most direct and explicit metaphor of the conflict. What can be more obvious than a boxing couple? The longer you watch it, the more ambiguous it becomes. Suddenly it occurs that a fight may turn into a specific dance, very well ordered one with coordinated moves. Dance needs comprehension, knowledge of the partner, respect… everything that’s essential in the life shared with another person, in the relationship between two different energies, two opposite sides. Surprisingly, box, a simulated ever-ending struggle can be read as a metaphor of life.

“Fighting Poland” seems to be a flamboyant picture of struggle seen from different, personal points of view. The fight that happens to each one of us, but in different time, place, circumstances. Fight which takes place next to us, sometimes unnoticed, but present… 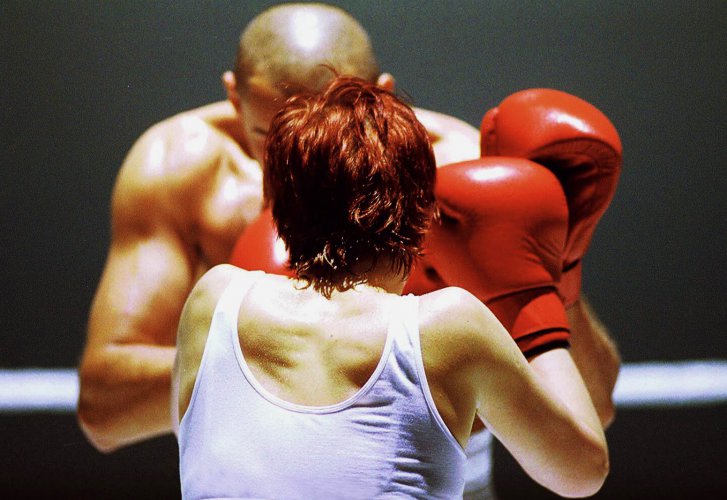